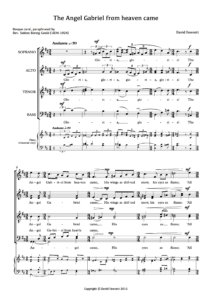 These familiar words have been given a very different treatment to that of the often-performed French carol. Scored for SATB choir with divisi, there is more of the sense of the drama of Gabriel’s annunciation – both the blaze of his appearance and a tenderness towards Mary.

The melodic material is largely constant between the verses, but with different textural and harmonic treatment, fitting the mood of the words.

Written as one of a set of Three Marian Carols (alongside Hail, Blessed Virgin Mary and Sweet was the song the Virgin sang), this is a challenging piece for an accomplished choir, and would suit both a dramatic slot in a carol service or a concert performance.

It received its world premiere in November 2016, during a Service of Lessons and Carols for Advent in St Paul’s Cathedral, London, Ontario, Canada.

In December 2017 it was issued on an album of contemporary Christmas carols, ‘The Silver Stars at Play’, recorded by the exciting young chamber choir, Kantos, released by Prima Facie Records.

You can follow the score while listening to Kantos’s performance in the video below:

PrintYourOwn: Alternatively, you can purchase a licence and PDF download from which you can make your own copies (minimum 20 copies), at a cost of £1.00 per licensed copy.

To enquire about placing an order, or for further information, contact David using this form.