This setting of Evensong Canticles (BCP 1662) was originally published a tone lower and for unison voices alone, and in this form was first performed at Choral Evensong in Ripon Cathedral on 21 May 2016, by the Yorkshire Decibelles under their director, Ruth Sladden.

In its new form, the setting can still be used in unison where necessary, with optional lower harmonising notes provided where the melody is in its higher reaches (F being the highest note). Suggestions are made as to how upper and lower voices can be alternated and combined, to provide variety of texture between the phrases. This unison version can be heard in the video below, sung by Swell Vox, accompanied by James Flores:

Meanwhile, for churches with a mixed voice choir, SATB sections are provided, which, alternating with unison textures, provide a satisfying but easy to learn setting.

The setting was used in this version at the 2018 Wessex Festival, at Festival Choral Evensong in Wimborne Minster, with The Orlando Singers and Festival Singers, Director: David Fawcett, Organist: Graham Scott, as can be heard in this live recording: 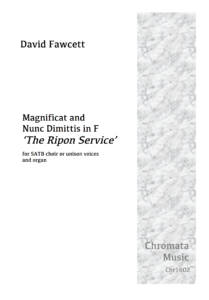 PrintYourOwn: Alternatively, you can purchase a licence and PDF download from which you can make your own copies (minimum 20 copies), at a cost of £1.80 per licensed copy.

To enquire about placing an order, or for any other queries, contact David via this form.